As family businesses go, APS (Anglia Partitions Ltd) has to be one of the most welcoming. Their customers obviously think so too, as was evident at the recent open day to launch their new office and showroom on Hardwick Industrial Estate, King’s Lynn.

APS is in the business of transforming space through use of glass partitions, suspended ceilings and mezzanine floors. However, the real attraction has to lie in the warmth of the Swadling family, who own and run the business. This might explain why 50 or so dignitaries, friends, business owners and suppliers turned up on a dull Tuesday afternoon – in the middle of the working day – to wish them well.

And, no sooner had the champagne glasses been washed and dried, another 50 or so turned up for an early evening gathering to toast the family in their new work environment.

From empty shell to cosy showroom in record time

The revamped premises on Hansa Road once served as a showcase for bathrooms and, prior to that, a car showroom. Now, the interior is unrecognisable compared to pictures taken last December when the inside resembled a big empty barn. It has gone from an vacant shell to a working office, warehouse and showroom in under seven months.

Rather than employ sub-contractors, the company used their own team of fitters to carry out the work. This meant that hitting a deadline was doubly important – not least because the office staff were carrying on with their work against the backdrop of  noise from diggers outside and partitions going up inside.

As family member Alice Swadling remarked: “Our installation team carried out the project from start to finish. The result is the best advert possible for the work we do.”

The official ribbon-cutting on July 4 was carried out by West Norfolk Borough Mayor Carol Bower. And Independence Day marked another landmark, this time for Mrs Bower and husband Simon, who were celebrating their silver wedding anniversary. Chatting to me after the official opening, she remarked on how impressed she was with the refurbishment.

“It’s wonderful to have a family business represented on this estate,” she said. “You expect a modern office to be light, and you expect it to be airy. What you don’t expect are all the references dotted about nodding to all the different areas of East Anglia.”

Mrs Bower was referring to the unique town and city-scapes etched on the front of the glass office walls, representing areas where APS does business: Bury St Edmunds, King’s Lynn, Peterborough, Ipswich, Great Yarmouth, Norwich and Cambridge. This work was carried out by Norwich-based company, East Coast Signs.

Never one to miss a chance to network, I chatted to Claire from Jordan Fitness and Rob Mason from King’s Lynn Website Design – both businesses located close to APS. I also met Tony Cope from APS supplier SIG Interiors, who are based in Norwich.

Family friends Janet and Geoff Warr were full of praise for the family, particularly managing director Ian Swadling, who founded the company almost 30 years ago. Mr Warr, who is now enjoying life working as a primary school caretaker, said: “I’ve known Ian for more than 30 years. In fact, I used to work for him as a fitter. After I took early retirement, we stayed friends.

“He is a fantastic employer, really caring towards his staff. Even during the recession when everyone was hit hard, he always made sure there was work for his employees.”

Putting something back into the community

Before long it was time for Mr Swadling to say a few words. After welcoming everyone, he quipped: “I’ve been in this business for 30 years and it’s the first time I’ve had a nice office – just before I retire!”

Mr Swadling also remarked on the fact that the they had stripped the building “right down to nothing and rebuilt it in just seven months.”

He thanked his three children who also work in the business: Amy, marketing manager; Richard, estimator; Alice, project co-ordinator, along with his wife, Helen, who is general manager.

The company also puts back into the community through two sporting sponsorships: Lee Hardy Racing, a professional superbike team based at Swaffham, and KES Community Tennis Centre at KES VII Academy in Kings Lynn. APS sponsored the junior teams, providing performance tops for matches and training.

Lee Hardy, fresh from the weekend’s British Superbike Championship at Snetterton, brought two of his superbikes along, as well as young rider Jake Dixon, who was place fourth and sixth in races at the weekend. Both caused quite a stir! Fingers are crossed for an outing to Brands Hatch at the end of the month.

Mr Hardy said:  “ I met Ian back in 2015 and have this company’s sponsorship to thank for the clean modern unit we have to work in. They have given us a really nice level of support.”

General manager Helen Swadling said: “We’re so impressed with the number of people here. People have taken time out of their day to come and wish us well, some from as far afield as Peterborough and Northampton. It’s really made our day.”

It couldn’t happen to a nicer bunch of people. 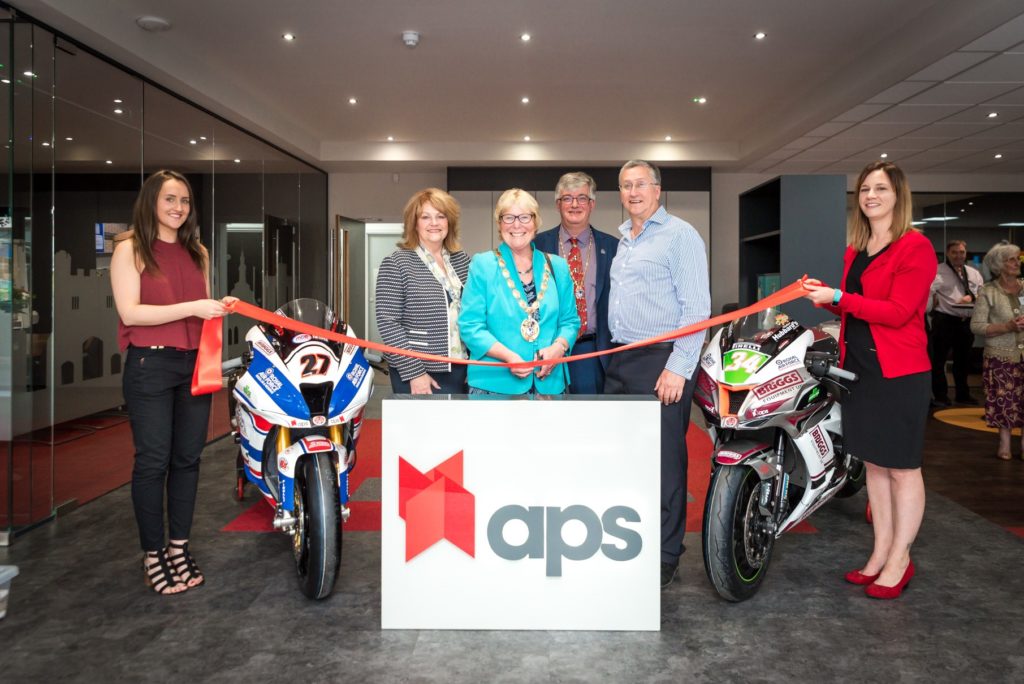